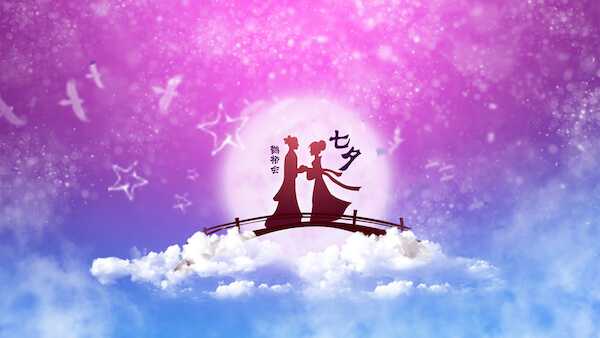 The Qixi Festival 七夕节 is called Chinese Valentine's Day in the West, and is celebrated on the 7th day of the 7th month of the Chinese lunar calendar. The "Qixi Festival" is one of China's most important traditional festivals and is now celebrated by multiple Asian countries.


History Of The Qixi Festival

The festival is originated from Han Dynasty, with a history over 2,000 years.

The Qixi Festival, also known as Qiqiao Festival, or Qijie Festival, originated in the Han Dynasty. Ge Hong's "Xijing Miscellaneous Notes" of the Eastern Jin Dynasty mentioned this festival, which is the earliest record that we have seen in ancient documents. On this romantic night, the girls placed seasonal fruits under the bright moon in the sky, praying to the sky and the goddess in the sky to give them intelligent hearts and nimble hands and make their knitting skills more adept. More importantly, girls worship the goddess for beautiful love and marriage. Countless loving men and women will pray to the starry sky for a happy marriage.

It is commonly believed that the Qixi festival is from an old Chinese fairy tale of lovers: NiuLang (Male) & ZhiNu (Female), who were forcefully separated into two sides of the milky way by ZhiNu's mother, who is a goddess of the heaven. The stars Vega and Altair in the sky represent the couple. NiuLang & ZhiNu are only allowed to reunite on the night of QiXi with the help of magpies. Magpies will form a bridge across the milky way and have the couple meet on the bridge.

It is said that on the night of Qixi Festival, you can see the Milky Way meeting of Vega and Altair stars when you look up, and you can overhear the whispering of the two people meeting in the sky.

Love in the modern-day

Dating these days is losing the sentimentality of old-school love. There are only a few that could feel love as strong as NiuLang & ZhiNu. Modt of the time it comes down to compatibility. Our genetics and personality are programmed to be more compatible with some individuals and not at all compatible with others. DNA Romance is here to solve that dating problem. We analyze your DNA and show you your possible best matches. We help find your soulmate scientifically .

For comments, feedback, investment or partnership enquiries please contact us

Not interested in online dating? Try our couple's report